TELTONIKA RACING TO RETURN TO THE DAKAR WITH A BETTER CAR

We are delighted to announce that the Teltonika Racing team is returning to the Dakar Rally next year. On August 25, Teltonika Racing driver Vaidotas Žala unveiled a new and better car which he will drive in Saudi Arabia in January. 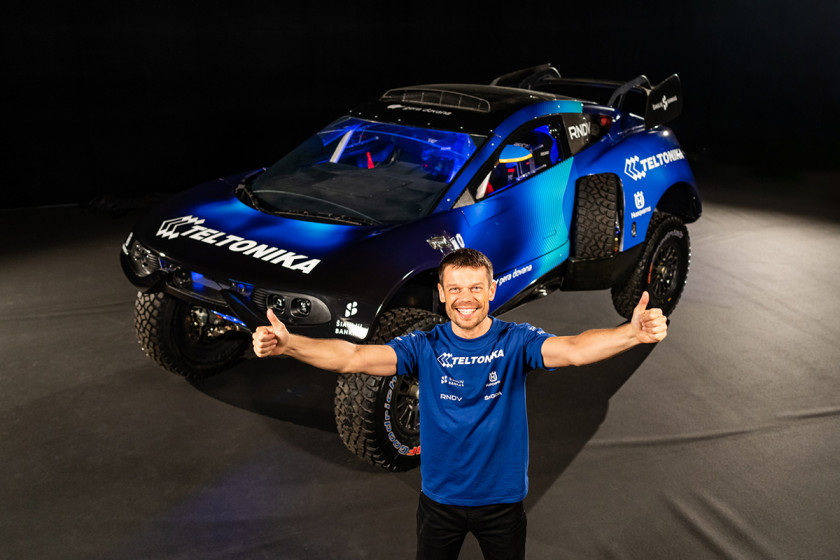 In 2023, Teltonika Racing will participate in the Dakar with a T1+ category Prodrive Hunter. This car was built by Prodrive, a renowned British motorsport and engineering company. Three Prodrive Hunter cars took part in the 2022 Dakar Rally, one of which, driven by multi-time World Rally Champion Sebastien Loeb, finished second.

“Prodrive made only its second Dakar appearance in 2022 but finished second, proving that 30 years of experience in motorsport can quickly bring good results. From my perspective, Prodrive Hunter has the best speed/reliability ratio available on the market for a private team today. We are starting at the Dakar on equal footing with the leaders,” said Vaidotas Žala.

According to the driver, Prodrive Hunter allows going faster and more aggressively over rocks and other large off-road bumps. This car has larger wheels and longer wheel travel than the T1 category X-Raid, with which Teltonika Racing finished 11th in the 2022 Dakar Rally.

Another advantage of the Prodrive Hunter is its 3.5-litre twin-turbo engine, which runs on fuel from renewable sources, minimizing CO2 emissions by approx. 80%. According to V. Žala, these engines were only introduced in the Dakar last year and are far superior to atmospheric engines.

Next year the Dakar will come again to Saudi Arabia. Rally teams will have to navigate a challenging route from the beaches of the Red Sea through the mountain region of the northwest and a stretch of giant dunes in the southeast of the country.

When asked what he hopes to achieve this year, the Teltonika Racing driver gave a modest answer: to do better than in 2022. “Maybe secretly I have higher hopes, but I am superstitious. You shouldn’t talk about expectations before the start,” added V. Žala.

The opportunity to compete in the Dakar is already an achievement

The major part of the preparation for the Dakar Rally takes place off the track and involves many important strategic decisions. As Vaidotas Žala states, “In motorsport, having a chance to start is already a great achievement. We’ve put a lot of effort into quickly establishing a team budget and successfully signing a contract with Prodrive. The support of Teltonika was very important for us. It allowed us to make strategic decisions already in March.”

Vice President of Brand Development at Teltonika IoT Group, Reda Paukštytė-Striogė, who participated in the car presentation, expressed her support and wished the team the highest position in Dakar: “We want to show that a Lithuanian company can take a leading position on a global level. So, by partnering with the Dakar team, we also hope that they will fight for the top position. Of course, this requires the right car. This year, we have chosen a factory team car that has already managed to climb up to the top of Dakar rankings in just two years. We like such ambition.”

We use cookies to ensure that we give you the best experience on our website. If you continue to use this site we will assume that you are happy with it.